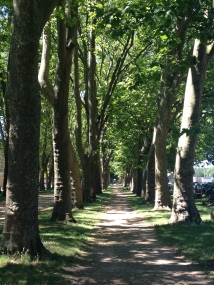 Decize was where our exploration of France by canal would end.  We had plenty of time before we got there.  Navigating locks had become almost second nature.  We were now casually securing the boat to the bollards with a single line.  My only wish was for decent lines.  The crunchy blue nylon ropes that come with the boats tend to land in a crunchy blue tangle.  I’d thought about bringing my own lines, but crossed that off the packing list.  They would have been much more practical than the sports coat I never wore. Next time I’ll pack my own lines!

Our cruising style became considerably more laid back.  A sleepy moorage we’d normal chug by became a place to tie up for lunch.  The constant nagging  in our consciousness was the weather report.  We were in for a record breaking heatwave.  The cocktail umbrella was now a permanent fixture on the deck, and we were down to shorts and t-shirts.  The canal was glassy.  If we weren’t moving there were no breezes.  At night the mosquitos gathered in clouds to swarm in through cracked windows.  The weatherman promised rising mercuries.

We passed Nevers by.  It was a detour the guidebook painted as being commercial and pedestrian.  The Aussies we met said it was their favorite stop.  I never figured out if it was the beauty of the place, or the wide variety of cold beer that was available.

We followed a couple from Germany up the canal towards Decize.  He was in the middle of a three month cruise from Brussels to the South of France.  His wife was nearing the end of a two week visit.

Their boat was decked out like a tramp steamer.  Lawn chairs, lanterns, fire extinguishers, life rings, an inflatable raft, and a steering station cloaked in shower curtains made the craft look like a mobile garage sale.

We tried to pass them several times, but as soon as we got close he’d open up the throttle and race ahead.  We’d eventually manage to get within hailing distance and then he’d repeat his maneuvers.  He wanted to be the first one into the locks.

Once in the locks the couple went into their practiced routine.  While totally out of sync they raced around showing off their individual specialties.  She insisted on turning the crank that opened and closed the locks.   He manipulated the throttle to ensure his bow was pinned to the side of the lock.  His backwash was tremendous and following him meant anticipating the bursts on the throttle.  At first he seemed to be popping in and out of the shower curtains just to fiddle with the knots that tied things to his craft.  I soon figured out he didn’t have a clear view forward.  There was too much junk in the way.  He was popping in and out to determine how hard he needed to slam the throttle.  “Wham! Slam!  Roar! Putt-putt!  Wham! Slam! Roar!”

I was determined to pass this garbage barge.  As we approached the final lock of the trip the couple finally pulled along the shore for lunch.  I slammed my throttle forward and passed them.

The final lock was both our first down lock and our first automatic lock.  The procedures seemed clear.  We approached the rope that swung out into the canal and pulled it.  Then we waited.  Nothing happened!

While nothing happened our boat swung out into the canal.  I tried reverse knowing I’d get maybe two boat lengths before the wheel became useless. I got maybe half that before we started floating down the canal and away from the lock.  A slow circle was in order.  I eased the boat forward.

The light on the lock was still bright red.  So, I swung into another slow circle.  On the next trip around I noticed the lock slowly filling with water.  Good news, because I was ready to try pulling that rope again.

Eventually the light turned green and we headed across the canal.  Just then the German couple rounded the bend at full steam.  Another boat was behind them and closing in.  The Germans blasted one of the seventeen airhorns attached to their craft.  The wife waved both of her hands in the air.

We waited until they passed and entered our final lock.  Automatic doesn’t mean fast.  This was a slow smooth passage down into the basin where we’d park the Cirrus B one last time.