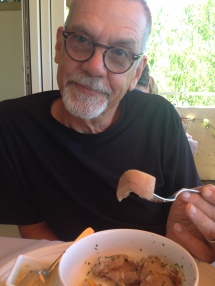 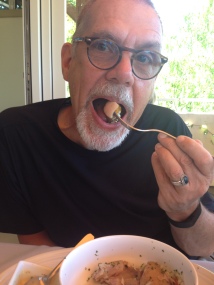 According to food writer Nick Lander there are two things to know about cooking Tete de Veau.  “Firstly, this is one dish that has to be cooked completely.  There is no more certain way of putting someone off Tete de Veau forever than to serve it undercooked.  Second is that once you have finished cooking it you must allow it to cool completely…otherwise it will explode.”

Le Guetin is just down the canal from Cours-les-Barres.  I only mention this because Cours-les-Barres is where the deceptively named Auberge du Canal is located.  If you are tired and hungry you might think you are going to one of the Loire Valley’s most celebrated restaurants.  Trust me!  That won’t be the case!!!  The 5 star restaurant in the Michelin guide is Auberge du Pont Canal in Le Guetin.  The “Pont” is critical.

Le Guetin is a tourist destination.  It has a double lock that is connected to an elevated canal.  It is quite common to have swarming crowds watch you navigate the locks.  We were scheduled to go through in the afternoon when the crowds were at their peak.  A quick consultation had us choosing to make a run at the locks in the morning.  With luck we’d go through before the tourists started swarming.

Staying on the Le Guetin side of the locks would also give us time to visit Apremont.  The village has been officially designated “The prettiest town in France.”  Given the meal in Cours-les-Barres, a momentary grounding, and an unscheduled dip into the canal, a bike ride to Apremont was on the agenda. First, we were going to eat in a 5 star restaurant.

Auberge du Pont Canal serves simple standard French cuisine. It is reasonably priced and includes traditional items such as frog legs and calf sweetbreads.  A quick look at the plates sitting in front of other diners gave us a great deal of hope. They were contentedly grazing.  I ordered a beautiful salad with shrimp, mushrooms, and sundried tomatoes.  Donna ordered the Tete de Veau.  She was expecting something akin to beef cheeks, or Mexican style cabeza.  What arrived was something else again.

I was busy digging into my salad when Donna looked across the table and spoke.  She turned the contents of her bowl over with a fork and quietly said, “Oh, I just can’t!”  A close examination revealed glutinous masses of jellylike substance and very little meat.  “Oh, I just can’t!” 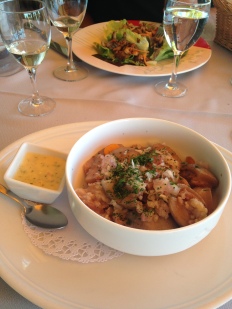 My reputation for eating almost anything doesn’t always work in my favor.  I looked around again.  The gentleman at the table next to ours ordered Tete de Veau as well.  He was digging in with gusto.  Donna and I exchanged our food across the table.

I couldn’t for the life of me figure out what I was eating.  It was like eating unflavored gelatin cubes bathed in chicken stock.  The gray slices mixed throughout had a slightly different texture, but the flavor was pretty much the same.  I figured I was eating a stew made out of boiled cartilage.  I was building strong bones and body!

Back on the boat I did a quick Google search.  The first paragraph in this blog entry was what popped up first.  I had eaten boiled calf face and brains.  Most recipes include more meat, but this was a traditional preparation stemming from the war years when people were starving.  Tete de Veau takes 5 to 8 hours to prepare.  It was frequently served for Sunday dinner.  It is a nostalgic dish that I’m sure brings back fond memories.  I experienced none of this.  What my brain told me was that I had eaten boiled calf face and brains.  Ewww!   A wag asked if eating brains made me any smarter.  I replied, “No, but I’ve started mooing!”

I had eaten some of the best prepared Tete de Veau in France. The Michelin stars and the rest of the meal assured me this was true!

APREMONT: The Prettiest Town in France

Apremont is described as being the prettiest village in France.  It’s nestled along the Allier River.  There are beautifully maintained cottages and the acclaimed A Parc Floral.  There is an impressive Chateau overlooking the village.  What is less mentioned is the Stable and Carriage Museum and its rotating special exhibits. In 2016 the museum is showing an exhibit detailing the history of Michelin.  In 2015 it was the Charles Perrault Fairy Tale Exhibition.

We unloaded the bikes and set out on the 6 km jaunt to France’s beauty spot.  It was 90 degrees, but the path was shaded.  There was a slight breeze coming from an abandoned canal.  The terrain was mostly flat with a few downhill inclines.  We passed a long abandoned and rare round lock, and a brand new hydroelectric facility.  Then we rolled into Apremont.

Apremont is exactly as described.  In this case pictures are worth a thousand words. 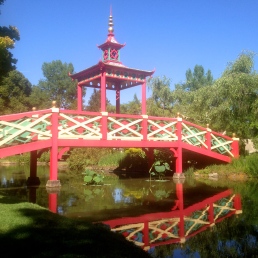 The Charles Perrault Fairy Tale Exhibition was something else again.  It stands as a testament to the dysfunction of committees the world round.  How else to explain the spectacle on display?

The idea was to create tableaux representing Perrault’s most lurid and gory fairytale masterpieces.  A portion of an outbuilding that once housed stables and carriages was allocated for this purpose.  Then someone collected, over what must have been robust objections, the mannequins.  Ninety-five percent of them were male.  The other five percent were androgynous.  Nowhere in this collection were the plump maidens of yore that populate fairy tales.  These were razor thin specimens with chiseled features.  Someone either had undue influence, or got a heck of a deal.

In the end these dudes were magnificently tarted up.  They were bewigged, lusciously gowned, and bejeweled.  Cleavers were placed in hands and red paint was liberally splashed around.  There planted in France’s prettiest town was the Quintessential Gay Night Club Halloween Drag Show Haunted House.  The word I’m looking for here is “Fabulous!!!”  I can’t be sure if that was the effect they were going for, but they absolutely nailed it!  Admission was included in the Apremont tour package!