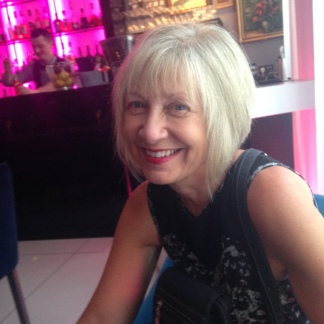 The expected heat wave arrived. It was 102 degrees. We explored Decize, ate at the celebrated Le Charolaise, and I even got a haircut.  Then we spent a day swimming in the Loire.  We also had the shortest conversation of the trip. “What do you think about???”  “…finding some air-conditioning in Dijon?”

Within fifteen minutes Donna secured what appeared to be the last air-conditioned room in Dijon.  I hooked a ride to the train station and bought the tickets. One more sweaty mosquito swarmed night on the boat and we’d be heading to the air-conditioned bliss of Hotel Vertigo

Hotel Vertigo was described as being a boutique establishment with plenty of high-tech features and exquisitely tiny rooms.  We’d reserved one of the tiniest.  It was billed as “The Cuccoon”.  We didn’t care.  We’d sleep in a closet if it had a button that sent in cool breezes.

Hotel Vertigo was as described.  It was a hipster’s paradise.  All smooth well-polished surfaces and a tightly controlled color palate.  The elevator had a glass bottom to induce actual vertigo.

We were upgraded to a larger room.  It was a tricked out closet.  Smooth French Pop played on the television set.  The screen welcomed “Donna Schwendeman”.  The air-conditioning worked.  When the card was in the slot so did the lights.

The bed was the bed you wished you could afford.  Billows of white feathers stuffed into high thread count fabrics, and giant pillows.  Blue lights circled the thing.  The bed actually cuddled.  Forget the beam that cut the tiny place in half and compromised head room.  We crawled into bed and jacked the air-conditioning up!  It wasn’t even noon yet!!!

Refreshed we set out to get lunch and explore the city.  Dijon is Paris’ perky little sister.  There is a fresh lively feel to the streets.  Stylish people bustled about and popped in and out of high end boutiques.  If Paris thrums with energy, Dijon bubbles.

We hit a restaurant next to a carousel and ordered Salade Nicoise, and white wine.  This was a tourist joint, but the salad arrived quickly and was excellent.  We had ordered it in more celebrated restaurants, but this was the best we’d had.  Dijon was looking better by the minute.

We enjoyed what Donna kept insisting was “Happy Time” back at the hotel.  The drinks were strong.  The appetizers kept coming and the space was sleek and sophisticated.  We learned Hotel Vertigo got a paragraph in the New York Times and had been booked ever since.  We were lucky to get a room in Dijon’s certified hipster paradise.  Although…the bar didn’t have any hipsters in it, just oldsters like us.

The following day we took the same route and found Les Halles open for business.  Les Halles is Dijon’s farmers’ market.  You can get everything you can imagine, and lots of things you can’t.  Escargot, horse meat, pig brains, calf face, whole rabbit, chicken feet, pigeon, rooster, and fish you can’t pronounce and have never heard of.  If they can’t get it , they’ll figure out where you can. 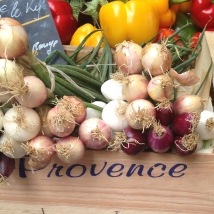 We eventually checked out of Hotel Vertigo and into our VRBO finds.  These were decorated thematically with antiques and artificial flowers.  One room had a portable swamp cooler that dropped the temperature a single digit if you added ice and water. The second room was on the ground floor and had a powerful fan that cooled one side of the bed.  Beautiful room, great breakfast, and a bearable 80 degrees when it was 102 degrees outside.

In Dijon we ate dinner at Le Marche de l’Huitre, Le Bistro des Halles, and Pourquos Pas?.  Le Marche de l’Huitre is on our return list.  The oysters were fresh and perfectly briny.  We ordered a pitcher of wine, but got a full bottle.  The Frenchman sitting next to us assured us we had ordered well.  It may have been the best wine of the trip.

The next night we chose poorly.  Le Bistro des Halles served a slopped together burger and a salad containing shrimp that should have been tossed at lunch.  The promised avocado was watery guacamole in the bottom of the bowl.  You’re right next to a world class food market and you serve this kind of crap?  If in Dijon, Les Bistro des Halles belongs on your  “Don’t Bother!” list.  We should have gone next door and had oysters again.

Pourquos Pas?  was on the other end of the spectrum.  It is highly rated and deservedly so.  We take pictures of our food when it’s good.  When it’s really good we forget to pull out our phones and just dive in.  The food at Pourquos Pas? deserved to be photographed.  It was beautifully composed and delicious.  We managed a few shots before we started sampling food across the table.  Pourquos Pas? was as advertised.  The awards displayed on its doors were well earned. 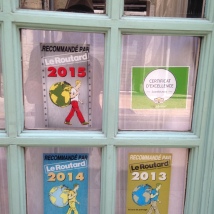 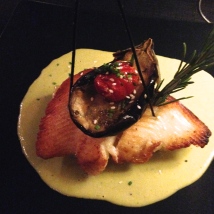 So, what do you do in Dijon besides eat and shop for mustard.  We took a wine tasting tour.  Drinking wine in a wine cellar during a heat wave is recommended.  We also know which Burgundy wines to order, and saw where grapes that produce a $15,000 bottle of wine are grown.

The following day after our shopping was done we watched a movie in what passes for French air-conditioning.  It was The Tale of Tales starring Salma Hayek.  There is nothing quite like watching a costumed farce filmed in Italy and dubbed into French.  No subtitles were included.  There weren’t needed.  They wouldn’t have helped.  The Tale of Tales was lukewarm, just like French movie theater air-conditioning.

Younger perky sisters have their own special appeal, but Paris called again.  Just her name on your lips reminds you why songs are written about her.  Dijon is small enough to be manageable.  It’s beautiful and perky.  It just isn’t Paris!