It’s 8 AM and it’s already 80 degrees. The van we rented doesn’t have A/C. A dog ate the gear shift knob and everything useful on the dashboard. The sound of the diesel engine is punctuated by shock absorber squeaks and unidentified pings. Shifting gears doesn’t require sports car finesse. Anyone who knows my relationship with motor vehicles understands that I am in heaven! I only wish the dog who ate the gear shift was mine.

Seven of us are packed into the van and headed to DinoPark Algar. There we hope to find life-sized robotic dinosaurs, a paddling pool, a paleontological playground, and a 3D cinema. The weather channel predicts 97 degree weather by noon. I am hoping the theater has air conditioning! 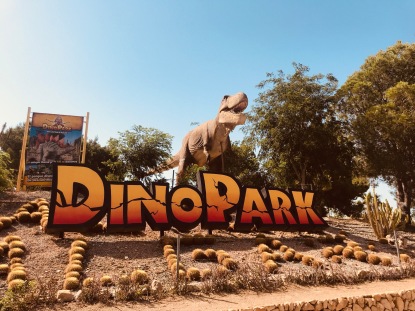 A spray bottle full of ice water and some frozen dishrags will hopefully keep 5 yr. old Oscar, and 3 yr. old Linus suitably lukewarm. Google thinks it will take us 56 minutes to get DinoPark. Google doesn’t take wrong turns, narrow winding roads, farm equipment, or slow going vehicles into account. I believe I was heard to say, “It’s a stick. I’m in first gear. If we go any slower, the van will die!” ”Die” wasn’t the best word choice.

Oscar knows the names of all of the dinosaurs, even the ones I can’t pronounce. He knows what era they lived in, and dismisses my claim that most lived during the “Splendiferous” era and farted glitter rainbows.

It becomes a race to see as many dinosaurs as possible. It’s a slow race. Linus isn’t one to hurry, and Oscar wants to soak up every detail. The adults are dragged along, and suitably impressed. I am intent on finding out if the 3D theater is air conditioned. 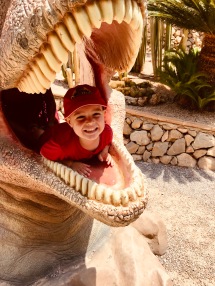 While everyone else was still finishing their  frozen treats the theater opened its doors. I located the A/C units immediately. With a cursory wave I entered the building. Once inside I texted, “It’s cool!!!” The film was a well-crafted pre-teen adventure with enough humor to amuse the grownups. I was prepared to see it twice just to sit in a cool room.

After the 3D theater experience we headed over to the splash pool. Extra coats of sunscreen were applied, and those who dared splashed about. I sat in a lounge chair under a tree. Donna frequently reminds me that my father was a bacteriologist and I should be more wary of germs. No reminder is needed when it comes to wading pools full of children. Donna and her daughters splashed about. So did Oscar, and Linus. I did not. I don’t believe Oscar and Linus’ dad, Ben, did either. Given the squeals of glee in and around the pool I assume the water was just fine.

On the way home we made an unscheduled stop in Polop. It was a “Just pull over!” moment. Luckily there was a bar in the square around the corner from where we parked. It was open. The food was good, and the drinks were cold.

We were ready to climb back in the van and head home. Across the street was a wonder that equaled DinoPark for me. A discarded piece of Spanish ironwork behind a metal fence was artfully propped up and photo ready. 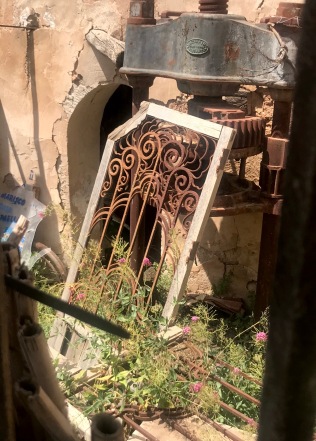 It was our first real tourist adventure this time around, and there’s nothing quite like taking an adventure in a packed van with no air conditioning. It took me back 30 years!