The second phase of our vacation involved exploring the coast of Spain from Alicante to Nerja.  Ever since Spain captured a spot on our radar viewing properties online has become one of our activities. It is not uncommon for Donna to send me five properties a day to peruse.

We have learned the old real estate maxim “location, location, location” is true.  So, the question we wanted an answer to was, “Why is La Rabita so cheap?”  Substitute other bargain locations as well.  We wanted to find out where there was a “there” there.

There is an airport in Alicante. This makes it attractive for Europeans.  We met a woman and her mother as we sat in a waterfront cafe.  They shared that owning a place in the Alicante area allowed a visit every six weeks.

What brings them so often? Sunshine, great beaches, a good Mercado, and Spanish culture. We found some excellent food at Casa Julio.  Our hotel, Almirante, was reasonable. The beach was right across the street. So was the tram that took you to town.

Rents and home prices make Alicante a bargain. A cute apartment near the market was listed at 129,000 euros. A person could pick up a rough apartment in a local neighborhood for 18,000 euros.

Alicante is easy to get to.  There is a thriving local community, and a thriving tourist scene. The beaches were long and sandy, but closed due to a Portuguese-Man-of-War invasion.

Mojacar is often listed as being one of the most charming coastal white villages.  It is visually stunning.  It felt like a retirement community, and we were the youngsters.  At our age you don’t want to feel older, or be constantly reminded of what lies ahead. Mojacar felt like the set of a geriatric zombie movie.  No, no, and no! 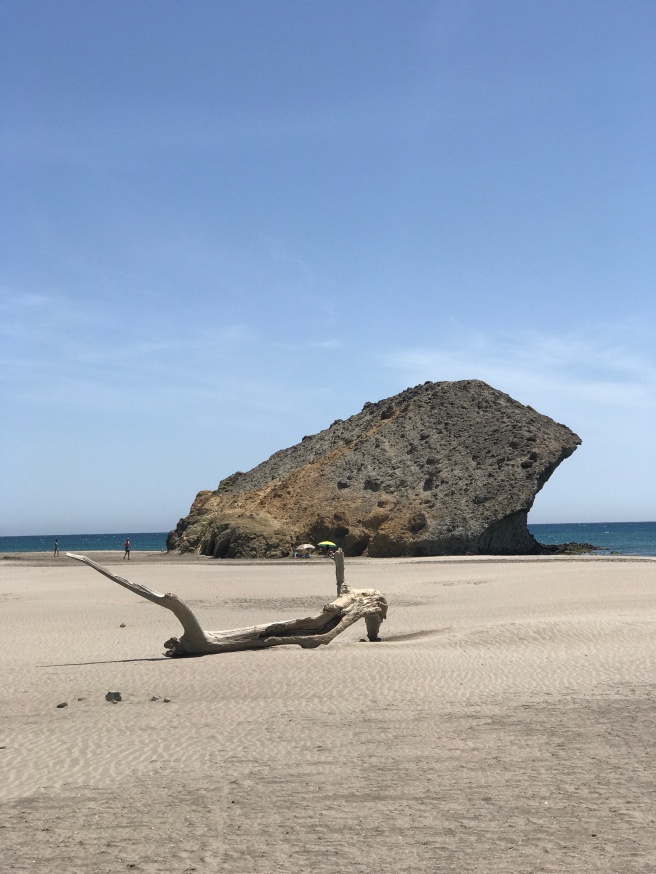 For my money Cabo de Gata-Nijar Natural Park was a must visit.  Looking at real estate was not on my agenda here.  The park did not disappoint. Stunningly isolated wild beaches where nature is the show are difficult to top.

Wild isolated beaches also tend to be naturist paradises. Topless bathing is to be expected on any Spanish beach. Nude bathing is not uncommon. Seeing a dude hiking along the road wearing nothing but a ball cap while swinging his belly, a walking stick, and his nether regions is a rare and memorable sight. Someone took the “Nature Park” thing pretty literally.

Cabo de Gata-Nijar Nature Park is sandwiched between San Jose and San Miguel.  Neither place was recognized by our onboard GPS.   Both towns serve tourists who are headed to the park.  San Jose is more upscale with trendy boutique hotels, and restaurants designed to feed the hungry hordes.  San Miguel had less overall charm.  It was uniformly tourist basic.

That being said, we had a spectacular meal at a beach shack in San Miguel. Chiri-Bus didn’t look like much, but one glimpse at the food told us we were grabbing a table.  We ordered gazpacho, clams in tomato sauce, and grilled squid.  Fresh squid with a perfect amount of char and a squeeze of lemon eaten at a table on the beach is a little slice of heaven. 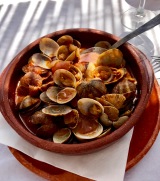 In San Jose we ordered a shrimp cocktail. It was transported from the 50’s.  What I thought must be shrimp mousse turned out to be Utah fry sauce.  Buried in the mayo and ketchup were tough balls of shrimp, cubed orange pieces, and shredded lettuce. Each bite was accompanied by Donna saying, “I don’t think you should be eating that!” 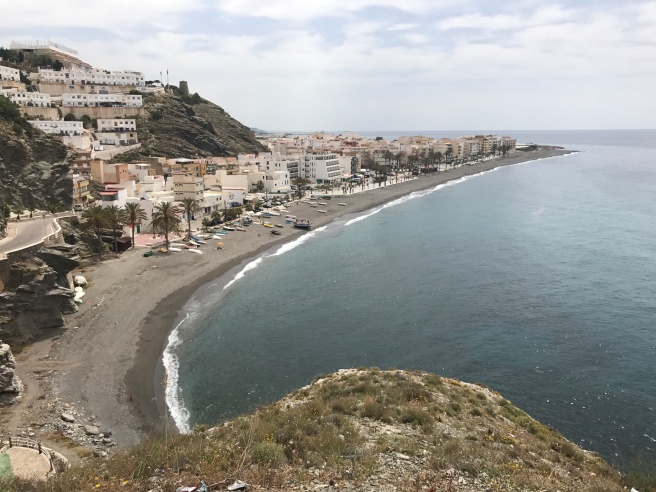 Every broad real estate search brought up these two beachfront towns.  La Rabita has been the focus of some tourist development money.  It boasts a new waterfront promenade.  When you do the research the question is always, “Why are these towns so cheap?”

The answer lies just around the bend at the end of the beach in La Rabita. That’s where you encounter the plastic.  Both towns are surrounded by acres and acres of degrading plastic tarps.  The greenhouses are so vast they can be seen from outer space. In El Pozuelo they are readily visible unless you are looking directly out to sea. In isolated coves broken down plastic is said to be knee deep.

I almost never fall in love with a piece of real estate online. There was a traditional town house in Castell de Ferro I kept my eye on for a couple of years.  It had a covered deck overlooking the beach.  I imagined sitting on that deck watching the Mediterranean sparkle.  The apartment eventually sold, but we still wanted to check out the town. 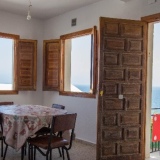 The properties shown above range from 52,000 to 100,000 Euros.  All but the rural casita are within walking distance of the beach. The town house that’s second from the left is the only place that doesn’t have a view of the sea.

Castell de Ferro? It’s charming. The surrounding terrain is steep enough that it’s not overwhelmed by acres of plastic tarps. The people were welcoming and friendly. Too small? Too hard to get to? Too isolated? Those are quibbles. Check out the color of that water!

This is where Donna said, “You get what you pay for!” Nerja has never come up on any lists of Mediterranean bargains.  By U.S. standards it probably should. We had to go to a real estate office to check into our homeaway.com room.  The agent assured Donna that she could find us a long term rental with a sea view for $500 Euros per month.  Donna took her card.

Nerja is beautiful , cosmopolitan, chic, and lively.  It felt like the best of all worlds.  Donna hit the beach and played in the waves.  I unkinked my back by nestling into the warm sand. Then we spent a memorable evening at Restaurante 34.

A great restaurant is as much about the people as the food. The food at Restaurante 34 is excellent! The thing is by the end of the evening Donna was up on the stairs talking politics with Carmen, Macarena, and the rest of the wait staff. Carmen supplied one of the best lines of the night, “Honey, in Spain the politics are f-d!”

Meanwhile, I was talking with an 82 year old gentleman who required the diligent care of his eldest daughter. His daughter inquired, “Dad, what are you up to now?” ” I’m talking to a soul.” “Ahhh, that’s what it is!”

When we departed there were hugs all around. Donna got kisses on both cheeks! The eldest daughter was still trying to convince her father it was time to call it a night.  Beautiful!

Nerja may not be on a lot of Spain on a Shoestring lists, but in this case you do actually get what you pay for.  That’s what Donna said, and her look told me there was no arguing it!