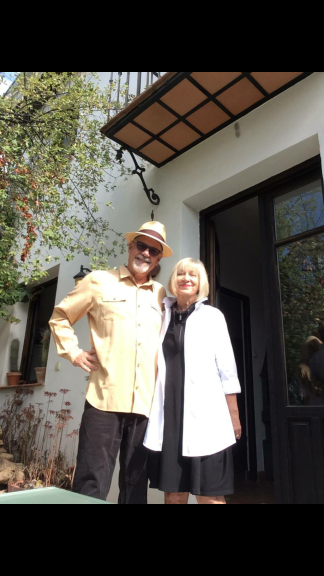 We dropped the rental car off at Central Hotel in Grenada. The Opel Mokka was one of the best cars I’ve ever rented. The built in GPS still couldn’t count exits from roundabouts though. Taking the sixth exit on a roundabout that only has four exits requires ignoring the polite English manners of Ms. GPS. Donna’s directions were more accurate. “Don’t listen to her! We’re going straight!!!”

Dropping rental cars off always feels good. What felt even better was the taxi driver dropping us off at Plaza Largo in the Albaicin. There was a sudden rush of exhilaration from our toes to the crowns of our heads!  We were home!

Our produce lady was still working her stand. She even tossed a free tomato into our bag. The swirl of tourists, locals, and feral hippies hadn’t lost its lively step! The familiar was still familiar. 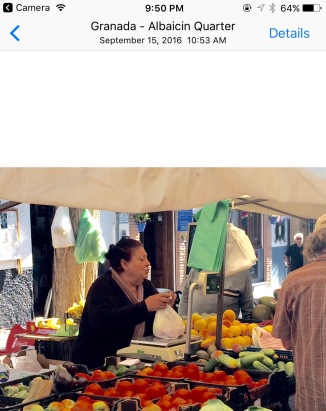 We took the short cut we discovered two years ago to the house on San Luis. The caretaker, Ana, rode up on her motorcycle the moment we arrived. The house with its fairytale views was pretty much as we left it in October of 2016.

They say familiarity can breed contempt. It can also build contentment. Our month in Grenada two years ago gave us a solid base to explore from. 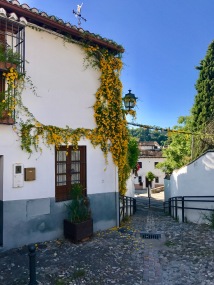 We found a new restaurant in the Albaicin. El Picoteo had only been open a few months. There is no menu. The waitress tells you what is fresh, and the chef takes it from there.  The veal tenderloin Donna ordered was epic. It was as big as her plate, and so tender you could cut it with a spoon. My squid could have come from one of the best beach shacks on the coast. 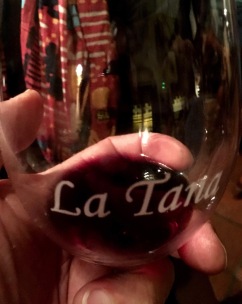 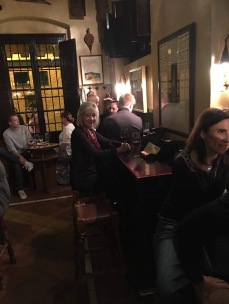 Everything seems to have fallen into place. Bar Tana was as good as we remembered.  Around the corner in the Realejo, I found a new barber, my new travel guitar/ukulele, and some excellent hole-in-the-wall cafes.  Off the Bib-Rambla we found a shop that specializes in fresh Italian pasta, an antique shop that had the ring we’ve been looking for, and shop that had a tabletop BBQ grill. Little things that once would have required the poor guidance of Google Maps to find.

Our abbreviated process has given us time to delve into the intricacies of Spainish olive oils. There are something like 260 varieties of olives grown in Spain. The favored type is the Picual. It produces a characteristic kick at the back of the throat. It’s bitter. In truth, we prefer smooth buttery olive oils. On the counter in the kitchen we now have five bottles of olive oil. A Picual, two blends, a rare Ocal, and an Arbequina. Tonight I’ll mix some smoked paprika, salt, and the Arbequina. I’ll smear it on the tuna, and then BBQ out on the patio.

Our restless search for a home base in Spain may be coming closer to an end. Sometimes starting back at the beginning makes sense. Sometimes lightning strikes in the same place twice! 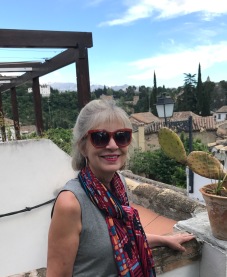