Observation, immersion, practice, and discussion are the basics of learning. So is admitting that a single bite of the apple will get you into trouble. We have been cautiously nibbling towards the core of Ecuador, but have only dented the skin.

In Quito we stayed up the hill from the historic center of town. The guidelines for staying safe were shared by our host, a restaurant owner, two police officers, and a cab driver. The cab driver locked all the doors as soon as she entered our neighborhood. This put me on casual alert.

The guidelines? Never set your bags down. Hang your purse strap across your shoulder and hang on tight. Don’t walk around with your passport. Carry a copy. If you are out after 8 pm, catch a cab right to your door. Don’t go anywhere alone. Lock up even if you are just taking out the garbage. It’s all sound advice. 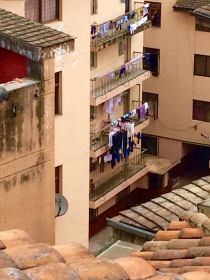 Did we ever feel threatened? We were mindful. As gringos we stuck out like sore thumbs. We never saw another gringo when walking up Calle Cuenca to our apartment. Few people made eye contact with us first, but they returned our smiles and greetings warmly.

In Cuenca the cautions aren’t as stringent. We aren’t staying in Gringoland, but Gringos are far more common here. The Ecuadoreans are unfailingly polite.  The Gringos stare holes in you. There’s a clique that we obviously don’t belong to. It’s a clique that has hired an armed security guard to stand outside their sleek modern coffee shop.

I was curious to find out what was up. My gut told me the Gringos are creating Arizonian enclaves and jealously guarding their ability to live on a shoestring. More Gringos can only mean higher prices. Our Friday morning coffee buddy, Jerry the Aussie, said that’s part of it. When outside of Gringoland people wrap themselves in a tight bubble to minimize interactions with people on the hustle. If you want to meet Americans, you have to go to happy hour at Fabiano’s. Wearing ear plugs is advised. “Americans are really loud!” My reaction is to double my efforts to speak Spanish and venture beyond Gringoland. 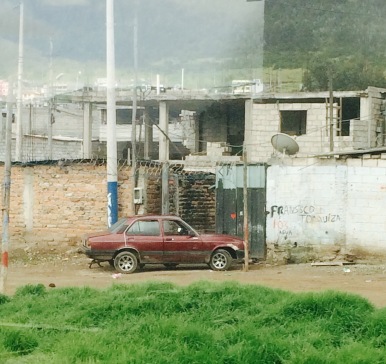 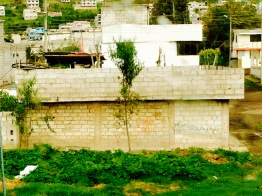 So far, venturing beyond Gringoland only applies in Cuenca. Like every big teeming city, Quito’s level of poverty gives it an edgy feel. Everyone is on the hustle. 50% of all working Ecuadoreans are self-employed. Every niche is filled. As you begin to venture away from the center of the city the same enterprising spirit is evident, but it looks like a hard scrabble existence. To be sure we never saw homeless encampments like those that exist under big city overpasses in the U.S.. In Ecuador poverty appears to have an agrarian element. There are chickens in the alley, pigs tied up on a stretch of land next to the train tracks, and garden plots where time and space allow. People are surviving here, but it’s way beyond the comfort level of Gringoland.

Upward mobility appears to be purchased one concrete block at a time. The ground floor of a home is roughed in first. Once that is done blocks are stacked on the second level. Houses stand at various levels of completion. Many homes are fully built. Some have corrugated metal roofs held in place with old tires. Some have covered second floor patios. Others lack doors and have no glass in the windows. They are occupied and keep the occupants dry. What else they provide I don’t know.

I am not well versed in Ecudorean politics. The official word is that President Rafael Correa has engaged in aggressive anti-poverty programs. His support of Ecuadorean Art and Culture is evident. Crime has been greatly reduced. Education is a priority. When we ask about the upcoming elections in February the subject quickly turns to Trump. From what we’ve been able to tease out, Correa’s popularity seems to be class based. Middle class support for the soon to be ex-President doesn’t appear to be wholehearted. His human rights record has been strenuously questioned. Perhaps that explains the hesitation to discuss Ecuadorian politics.

We met an an exchange student from New York and had a brief exchange about the state of things at home, and in Ecuador. Trump came up. We laughed. It’s difficult to find anyone who isn’t horrified. Canadians, Chileans, Germans, Brits, Aussies, and Peruvians all express sympathy and wish us a short nightmare.

In terms of Ecuador’s upcoming election…there appears to be a slate of questionable choices. Many candidates lack the education and experience to guide Ecuador through its challenges. Several people shared that the most qualified candidate has a degree in finance. He is also noted for being a clown on Ecuadorean television. No, I am not making this up! 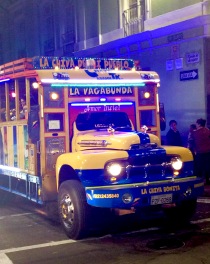 None of this takes away from the charm of Cuenca and Ecuador. A place is always more than it’s politics and problems. Cultural roots run deep here.  There is a pride and community that people can lean into. Ecuador is not the United States. Here the culture starts on the inside and shines through to the surface.