While we were stuck in Germany I started thinking about a phenomenon I’ve been calling the “binary mind”.  In Frankfurt, and again in Grenada, dealing with employees sitting behind a computer screen put us in a hampster’s wheel. We found there was a profound inability to deal with occurrences that deviated from the norm. Again and again the answer was, “I can only do what my computer lets me.”  It is becoming a universal.

This is the use of technology to more efficiently and accurately tick off boxes. The problem isn’t technology though. There is a kind of binary thinking that pushes us towards abandoning nuance. Coupled with technology the tendency becomes more evident.

Our phones are our constant companions. They record our lives’ minutiae and bear silent witness to atrocities. We are frequently told what we think we have seen is not what we have seen. We participate in a societal testing regime where we begin to reject the notion that there can be credible answers to poorly constructed questions. In this world we seek convergence rather than divergence. We seek the static and predictable instead of the dynamic. 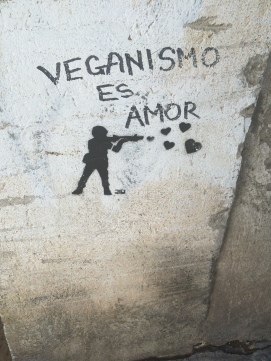 I have noticed this convergence while engaged in taking travel photos. We come home from our adventures with nearly identical postcards. Herded into the footsteps of others, where we recognize acceptable compositions, we snap our photos.

This began well before the proliferation of pocket sized cellular devices.  A lifetime ago I took a picture of the Pueblo in Taos, New Mexico. I liked it enough that I had it professionally framed. Since then I have seen nearly identical photos in dozens of places. It is a photo of the Taos our preconceived notions seek.

There is a much better photo from the same road trip. I took it several hours after my nasty heat-fueled refusal to eat lunch anywhere near a caged and catatonic wolf in the Roswell, New Mexico Zoo.

We fueled up at a Roswell Texaco and were coasting on vapors before we found anything remotely resembling civilization.  There I snapped a photo of an abandoned cafe and a burned out tree.  The photo is preserved in a cheap plastic frame.  There is a novella locked in that frame. Binary decisions made on a long road to, “No.” 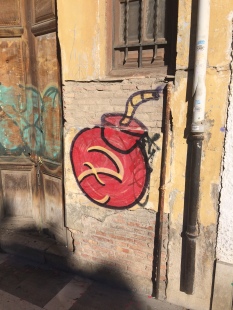 So, as I stand with other travelers snapping postcard visions I sometimes choose to let pieces of graffiti drift into my focus. Some are sly and winking. Others resist notions of, “Yes, or No.”

There are pieces of graffiti that go beyond acts of territorial pissing. They exist to be both dynamic and ephemeral. There are stories contained in their thin layers of paint. A communal scratching of the surface in shades of black, brown, and white.  A burst of color. Riot Dogs, and short-fused bombs.  They tell us a story, but the James Joyce walking tour isn’t really necessary.

The temptation is to find a piece of graffiti worthy of framing, or posting.  To actually do so is an act of defacement.  It moves the graffiti out of the dynamic and into the binary world of, “Yes, or No.” The graffiti then becomes defined as being good enough to be something it was never intended to be. Artistic pretentions be damned!

A thousand snaps of a bride kissing a groom, or tossing a bouquet over her shoulder.  Binary decisions on a long well- worn road where we are taught to forget…“In the beginning was the word, and the word was ‘Yes!’  What else could it have possibly been?” ~ Antonia