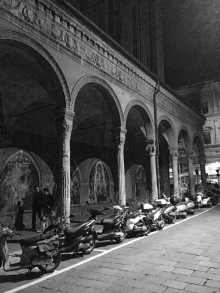 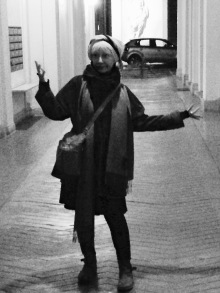 It’s our last night in Bologna. The bags are packed and sitting by the front door. Reflection comes easily. We love Bologna. Asked why, Donna has a more involved answer than I do. My answer??? Well, I have an inexplicable attraction to porticos, and Bologna has more of them than any other city in the world.

I checked out that last bit on Wikipedia. This is not something I would normally do. That’s usually Donna’s territory. She loves reading about the history of a place. “Just imagine! Cleopatra actually walked here!!!”

There are several ways to respond to Donna’s exclamations of wonder. The wisest is to keep my mouth shut. That isn’t one of my talents.  So, I venture where angels fear to tread. “Cleopatra  isn’t the only one.  Think of all the tourists who have walked here.  Must be over a billion footsteps by now.”  This earns me a sharp, “Oh, just shut up!”

When it comes to historic buildings I am likely to go into my Trump Tower routine. “I want to know about the people who carved the stones and laid the bricks. The person whose name is on that building never lifted a finger.”  Yes, I have delivered that annoying speech. It never fails to earn me what I call one of Donna’s little prayers. Several deities and their earthly representatives get mentioned! When it happens in a beautiful cathedral it cracks me up.

Donna seems vaguely amused by my fascination with porticos. That’s something of a surprise. I know from experience her comebacks are always stunningly on target. Perhaps the teacher in her is glad I am showing an interest in history. Although, I suspect she merely thinks my interest in porticos is weird. She probably puts it in the same category as my love of impractical gadgets, condiments, and cleaning supplies.

Donna is right about my interest in porticos. It’s weird. She did agree to trod up the Passo di San Luca with me. It’s the longest continuous portico in the world. I looked that up too. Pilgrims used to climb up the hill to Madonna di San Luca on their knees. Someone decided covering the path with 666 portico chambers would be a service to God and the folks crawling up the hill.

Donna read the part about the 666 chambers and almost changed her mind about the adventure. “Why 666??? Maybe this isn’t a good idea!”  We walked all the way to the top despite my sore hip. The chambers were numbered, and Donna was relieved when they stopped counting at 658. Good thing we didn’t run into any black cats. She would rather drive into a ditch than have a black cat cross her path. She also doesn’t walk over grates. We found several of those. 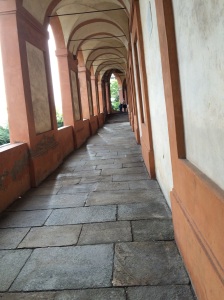 The hike up to Madonna di San Luca contributed to what wound up being a twelve mile day. The pilgrims back in the day, and the athletes we saw on our trek, had a more strenuous journey. We walked and stopped fairly frequently to rest my hip. The pilgrims of yore crawled on their knees in the sun and the rain. The athletes use the path as a training ground. We saw two women in track suits hopping up the path like frogs. Despite taking the easy way up my hip was miraculously cured. Weird!

None of this explains my fascination with porticos, or why I am coming home with 100 portico pictures. Or…why so many photos look like duplicates even though they are not. Obsessions are seldom practical things.

I did locate one of the original wooden porticos. Examining it made me remember a piece of history I read.  Sure, porticos provide shade when it’s sunny, and shelter when it’s raining. That’s obvious. In their early years porticos also provided large covered workspaces in a city that was rapidly growing. Under the porticos was where life happened. The old portico was a rough thing. Today most are beautiful. A practical thing made beautiful always appeals to me, and in Bologna the Art of living is evident.

Bologna??? I can go on and on about the things that make it an amazing city. If you ask me? I’ll just say, “I love Bologna’s porticos!” 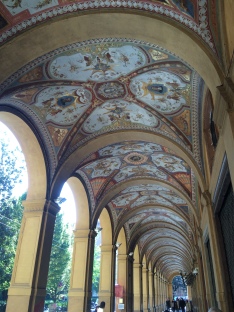