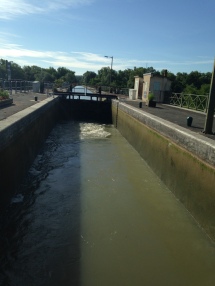 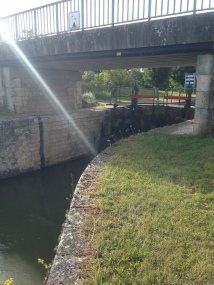 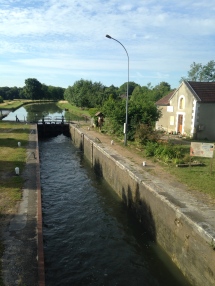 It took two locks, dry land practice, and tossing the guidebook out, but we finally got going through locks down to…almost enjoyable.  The guidebook assumes a larger crew, helpful lock keepers, and a certain degree of familiarity with the boat.  “Toss the line to the lock keeper.  Have a crew member climb the ladder and toss the lines to them.”  This isn’t helpful if the lock keeper has a cell phone pasted to the side of his head and is discussing party plans with his girlfriend.  It isn’t helpful if the lock keeper is pretending she can’t see you.  Then there is the ladder the crew refuses to climb!

The thing about the ladder is this.  It is widely advertised that French canal boats have through hull heads.  When you flush the toilet it goes through a crude blender and then straight into the canal.  My crew was doing a surgical scrub every time she handled a line.  She was heard to say, “If I knew the canal was full of shit, I never would have booked this trip!”  Now we were in a lock with a brown sludge covered ladder.  Donna was never going to climb that thing!  Never!!!

I suggested letting Donna off the boat before the locks and then piloting in.  This was dismissed by an English couple with 15 years of experience under their belts.  We met them while going through the second lock.  They supervised getting a boat that had gone aground off a silt ledge.  This involved lots of eye rolling and snorts of disapproval.  I suspect watching novices attempt the locks is one of their forms of entertainment. We took their advice and Donna rode into the locks looking for someone, (ANYONE!!!) to throw a line to.  Only luck, and the bossy husband in the boat ahead of us saved the day. The ladder was not going to be touched, climbed, looked at, or even mentioned again!

No one to throw a line to, and a sludge covered ladder???  We were back to the plan we had for the second lock.  We were back to, ” I’ll pilot the boat and you walk.  We’ll coil the bow and stern lines next to the helm.  I’ll toss the bow line first.  Secure it, and then I’ll toss the stern line.  Wrap it around the bollard and toss it back to me.”  ” Great!  I can’t handle two lines”  “Try stepping on the bow line.”  ” It just slides off the bollard!”

Bollards are bulbous protrusions made out of steel.  You slip your lines around them and then hang on for dear life.  The lines control your boat while water rushes in or out of the locks.  There aren’t many cleats in the locks or marinas.  There are bollards, or circus tent stakes you pound into the ground with a mallet.

The guidebooks made navigating the locks sound easy.  In reality it went like this.  No matter how nicely the lines were coiled they landed in a crunchy tangled knot at Donna’s feet. Donna untangled them.  It was difficult to tell which line was which.  Lines  were slipping and sliding.  Donna was juggling ropes.  She had one foot on the stern line while she tried to secure the bow line.  It looked like she might attempt the splits!

Hmmm! A half hitch could come in handy here.  Secure the bow line to the bollard with a half hitch.  Then deal with the stern line.  We practiced the half hitch maneuver while the boat was moored.  It was a move that ensured Donna was only dealing with one line at a time.  I learned this knot back when I was a Boy Scout. It made life and the locks easier.

Boat handling drills helped too.  Our boat was easy to oversteer.  When it went wonky it felt like you were piloting a bumper car.  Slow easy corrections and a little speed seemed to work best.  Current, curves, and wind could quickly put you back into bumper car mode.  Slowing down to enter the locks effected steering as well.

What to do?  While puttering down the canal we practiced bringing the boat to a slow straight stop.  We practiced bringing the boat to a complete stop at a specific tree, rock, or bollard on the shore.  We brought the boat to shore on quiet stretches of water.  We  tossed lines just to get the feel of them.  We tied half hitches.  If we could do these things outside of a lock, we’d have a better chance of doing them inside.  We expected to screw up!  We started to see progress!

It should go without saying that practicing patience, giving clear simple instructions, and refraining from loud colorful language are absolutely necessary.  I have watched couples attempting to launch boats enough times to know that boat ramps and locks are prime locations to watch couples put major dents in their relationships.  You see it in the eyes of the wife!  He’s losing it and she’s planning a mutiny!!!

By the third lock Donna was getting off the boat and walking to the locks. I piloted the boat into the lock.  Once the boat was nestled against the wall I tossed Donna the bow line.  She secured it to the bollard with a half hitch.  I tossed her the stern line.  She wrapped it around another bollard and passed it back to me.  Wrapping the stern line counter clockwise seemed to work best. Then Donna went back to the bow line, untied the half hitch and controlled the bow.  I was in charge of the stern.  The boat rode up the lock.  At the top we flipped the lines off. Donna got back on the boat and we departed.

The last paragraph wasn’t in our guidebooks. It’s what worked for us.  If there was an easier way, we’d find it.