After viewing the first 18 properties we started whittling our list down to the Top Three.  This meant factoring in new information about houses in Oliva.  They are subject to the whims of the climate.  Oliva is humid, and when it rains it pours.  A recent weather forecast predicted 7 inches of rain within a 24 hour period.  Few houses have foundations.  They are solidly built, but slowly suck up ground water.  Until you get higher than your waist chances are the paint isn’t sticking to the walls. It comes off in fist sized flakes, or turns into powder.  Roof terraces and tile roofs are susceptible to leaks.  The water from above and the water from below conspire to meet in the middle. Many of the houses we looked at told this tale.

You could scrape the paint on the back wall of a cute compact townhouse down to concrete with a bare fingernail.  The culprit was the next door neighbor’s roof terrace.  The lowest room of a mountain goat’s paradise of precarious stairs was tinged with pink powder.  It was either red tiles leaching through, or mold. A fixer with stunning tiles was dotted here and there with obvious damp spots and paint in various states of decay. It’s entryway was crumbling.  A little patch of powdery paint near the floor started looking like a good sign.  Occasionly you’d find a house where the paint had been meticulously maintained and was actually sticking to the walls. 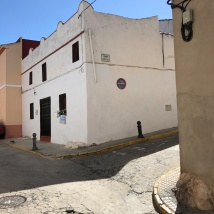 Whittling down a list of 18 houses down to the Top Three could have been a daunting task.  Our focus on the amount of work a house would require made it a lot easier.  The Top Three were a reformed horse stable, a house we were calling Almost Arabian, and a generic townhouse we found through Oliva’s  ex-pat Facebook page. 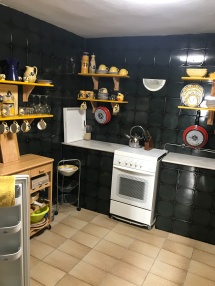 The Stable had been reformed with attention to detail.  It would require tweaks, but it was mostly done.  Bold tiles in the bath and kitchen either overwhelmed, or wowed! The front room and dining room were graced with Valencian ceilings.  The roof terraces had been meticulously resealed.  The view was promising. Paint was sticking to walls.  The price tag underscored this.  The Stable was charming. 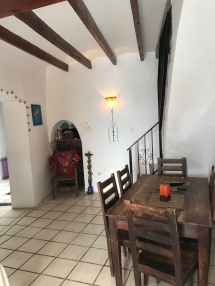 Almost Arabian earned that moniker because of its half-assed decorating scheme.  Someone aimed for hookah lounge sophistication, but only managed to execute shared student housing. When it came to naming the place, Bongwater Flats was definitely in the running. The house had good bones, a candy apple red IKEA kitchen, and a top floor with a snug and roof terrace that could host one Hell of a party.  We were mentally redecorating the place.  We were also weighing the time, effort, and expense it would take to make the place look like it didn’t need a stray dog to complete its vibe. 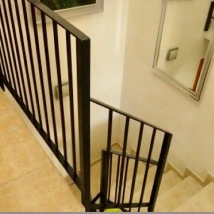 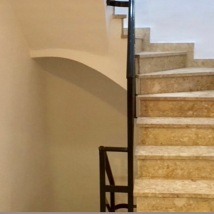 Casa Generic was comfortable in a spiffy late ’70’s way.  Spanish features were hinted at, but what do you do with floors that look like a rockhound’s Saturday afternoon project? The bathroom and kitchen were tiny and utilitarian. Casa Generic did have three stunning terraces. One right off the kitchen, one off the master bedroom, and a roof terrace with views over the town to the sea.  The terraces alone sold the place.  The bland interior created second thoughts.  The floors were something you’d have to get used to. Uck, but the price was right and the paint was sticking to the walls.

Donna and I don’t do the House Hunter’s International visit to the local cafe for a discussion thing.  We do our talking on the fly.  There were several more places to look at, and we were going to look at them. The 35,263 steps walked and 6 floors climbed finding the Top Three weren’t going to deter us! 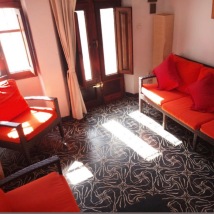